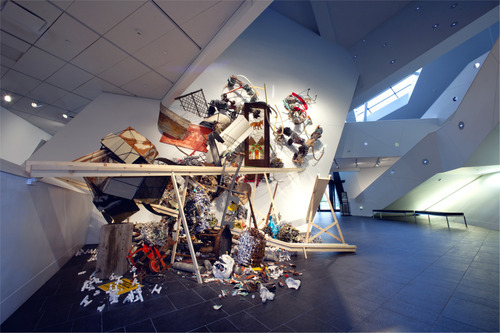 The twenty-five artists in Overthrown: Clay Without Limits took on adventurous challenges to make the works in this exhibition. Most were made especially for Overthrown and many are in direct dialogue with our dynamic Daniel Libeskind-designed architecture; they move beyond the pedestal to the wall, the floor, and even the ceiling. A few extend beyond the Anschutz Gallery, across the entire museum complex. They break boundaries that are physical, technological, conceptual, and spatial.

Working in all scales, from architecturally expansive to almost impossibly small, the artists in Overthrown employ twenty-first-century technology hand-in-hand with standard modeling and molding techniques. They use digital cameras, computers, laser cutters, 3-D printers, and computer-controlled mills along with more traditional tools.

Some push the forms of functional objects. Others push the limits of fragility. They take risks that draw on material chemistry and maverick kiln techniques. Some of their works include not only clay, but also found objects such as metal, plastic, and abandoned industrial materials. Overthrowing our expectations of ceramic art—its size, its context, its methods, and its meaning—these artists show us new ways of using this versatile and timeless material.

The feature was presented on Ceramics Now in July 2011, and was published in Ceramics Now Magazine – Issue One. The “Overthrown: Clay Without Limits” exhibition was on view at The Denver Art Museum June 11 through September 18, 2011.

Ceramics in the Expanded Field is on view at MASS

Decolonizing the Discipline from Expanded Ceramics

Shozo Michikawa is on view at Hostler Burrows, Los

Bente Skjøttgaard: Tableaux is on view at Galerie