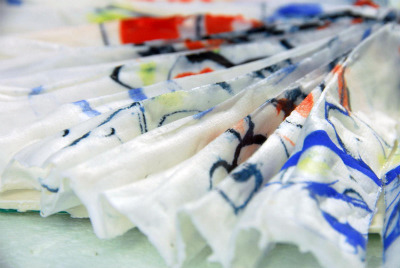 What was the starting point for your investigation with paper clay?

Some years ago, when I had finished some jewelry pieces using porcelain together with paper, a  friend suggested translating the paper part in porcelain as well. I tried and failed, but my mistakes turned out rather nice in their own way. They encouraged me to explore this path.

Now observing earlier pieces it seems the idea of folding was already there.

I think any research in art is not just a technical one. Yes, I wanted my porcelain to resemble paper but most of all I wanted it to have a life of its own. My porcelain objects have grown to be flowers, they are wishes or a song. They belong to a different world, follow different rules, not those accepted by the pragmatic world of utility, they truly belong to the “world of beauty and imagination*”.

The technical skills with paper-thin ceramics have their origin in beliefs about the nature of art. Objects made by human beings belong to the realm of art when seen as aesthetically pleasing.

Seeing something as a work of art or looking at it are not the same. Looking has a beginning and end. Seeing, however, is an achievement – it has no beginning, no stretch of time; it is the realization that we are confronted with something different. The work of art is not confined in a cave of individuality. It participates in an essential way in our everyday communication. From the act of seeing emerges our ability to understand a message. The beautiful object has an intention; the intention of sharing, of telling a story and exploring our world of imagination.

Message, Story, Communication, these are the words that describe my previous occupation with writing, using paper, making books with etchings. I was held captured by these sheets of paper on which I could try to communicate with others.

My Loveletters and my Ode to Monet go back to my obsession with paper carrying stories to those prepared to look, to understand and hopefully, to enjoy them.

Do you find working with porcelain hard, especially if you try to make it look like paper?

Working with porcelain is really easy if you get a bit used to its terrible shrinking, its proneness to distortion, it’s tendency to collapse and its ability to ‘remember’!…

But there are also many advantages over other clays. It is easy to join dried pieces together or repair a piece before baking, it is easy to glaze using a brush (saving on amounts of glaze) as most unevenness will disappear in the high temperatures and of course usually colors look nice and bright on the white body.

What I find really difficult is the handling of the folded Loveletters when they are only bisque fired and still extremely fragile. Because I want to glaze them only on the backside, I have to turn them someway. Eventually, I solved this using a piece of light foam polystyrene with which I can turn the letter like an omelet on a lid (some cooking experience helps a lot in ceramics). 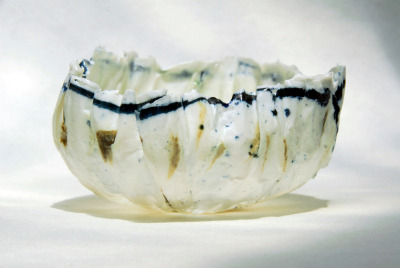 How did it all start, do you remember your early works? What did you learn from that period?

It all started many years ago, but there were no ceramics for a long time. Then it happened – almost ten years ago – that I came to live a few years in the beautiful town of Oporto (in Portugal) with its azulejos everywhere. It was a bit like coming back home but in a different country; the Portuguese azulejos (tiles) share a similar history with the Dutch ones, they speak of travels around the world to far away Asian countries, they bring back memories of perfumes and spices like the ones we used at home when I was a child.

While the Dutch tiles were used only indoors due to their fragile nature– being terracotta – , the Portuguese tiles are everywhere; inside and outside houses, they cover entire walls and churches, they are mostly blue and white, like the Dutch tiles…

With a friend, I followed some lessons making Portuguese-style azulejos at the Craft, a magical place in one of the oldest narrow streets near the river.
With the same friend some years later, now in Milan (Italy), I spent several days at Atelier Nibe where Gabriella Sacchi reigns among her beautiful grès objects and where she kindly gave advice on all our questions.

Sometimes something unexpected happens that reveals a decision not yet realized. In the village where I live I was asked to design and make a tile panel and as I wanted very much to make those tiles I bought a small kiln, that unfortunately soon broke down…, but by then nothing could stop me anymore.

I read every book about ceramics I could find, one of the most inspiring was and still is Nigel Wood’s Chinese Glazes. I experienced nonstop, passing from terracotta, grès and a self-made (a grayish) porcelain to the discovery of beautiful white porcelains. I made moulds, stamps, I incised, folded, cut, inlaid colors. And then somehow the folded letters were born and got a prize in Saragossa. That was encouraging. 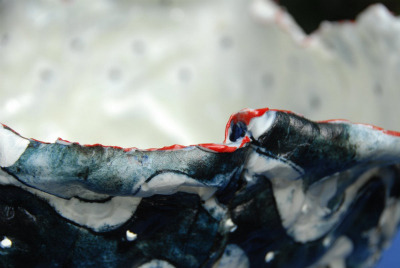 When you make your works, you give great attention to the rims and the colors, but on which do you concentrate more?

No, I don’t think I concentrate on any detail, in particular, I aim for some final vision that slowly reveals itself when working at it, maybe changing or asking for variations while I go along.
But yes I love colors; I keep in mind that later on I may want to assemble pieces in a composition of different colors and forms, and I find that sometimes just a small accent like a colored rim can change the result dramatically.

Usually, I can be found in my atelier in the garden of my home in a small village near Milan. At the moment, I’m working on several projects. One of them has been asked by ‘il Fondo Plastico’ to celebrate the last 150 years of Italian History. My pieces are inspired by the film “la dolce vita”, by the song called “Marina, Marina, Marina” and by a famous Italian cyclist. They will (hopefully) be exposed on various occasions this year, in Italy.

At this moment (until 19 June) the Folded Loveletters bought by the museum of Teruell are in the exhibition 10 años de Cerámica Contemporánea. CERCO, in Saragossa (Spain). 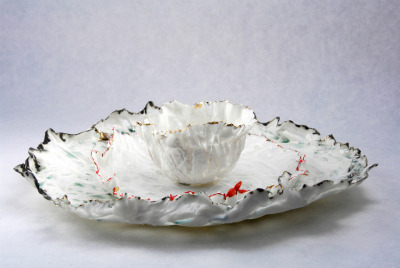 Give an advice for the young ceramic artists.

I am uncertain as to what advice I could give.

I simply start experimenting, following the journey my fingers undertake; they always seem to know more that I am consciously aware of. Whenever I feel ‘blocked’ just starting to work helps and draws me in some world where anything could be realized and where so many paths appear unexplored. Since I’m very curious, I wish I could try and share them all.

“After many  years spent in writing, painting and etching , using reams of paper, I ended up working with porcelain. Although I like making “normal” cups and plates, tiles with fishes, birds and fountains,  I like to experiment constantly and than, somehow,  I find myself using the material like paper or trying to make it look like paper; printed on, incised and folded.

I am fascinated by the fragility but also the strength of this ceramic material and, perhaps due to the history of my journey through the world of art, I love  to transfer the qualities of paper to this material to resemble paper, crumpled. covered with writing and folded,  exploiting its transparency, its different surface qualities,  its capacity to catch and preserve  colors on the inside as well as on the outside , underneath  and over its glossy, satin or mat skin.

I stretch it, paint it, fold it, going to the limits of its strength, fragility, and transparency. And it often leaves me in desperation because of its fragility.   It leaves me breathless with the feeling of happiness to see its fragile intensity.“ Margrieta Jeltema