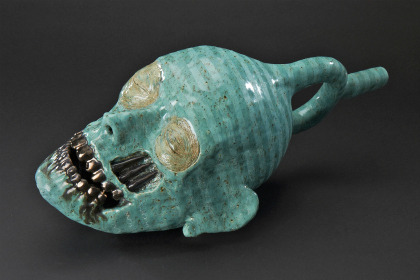 The theme of your works is very dramatic and sometimes macabre. Why did you take this challenge of confronting with your subconscious?

I want to make work about whatever comes naturally to me. Instead of, for instance, sitting down to brainstorm different ideas to see what comes up, and then pick the ‘best one’ to use, I would rather see what surfaces naturally– when it is uncensored. Of course I am making decisions but, I allow room for intuition–rather than forcing the work to go in a particular direction. Art certainly has many roles–one is to depict and create beautiful objects. But, that is not the only way art can serve us.

We all know that the human nature has a dark side. You explore and question this side with your works and with what they express. Do you find exploring this side of human nature to be hard?

Not at all. I find the work honest and refreshing. I am currently building a two-part piece to be installed at Socrates Sculpture Park in Queens (Long Island City), New York this fall. Socrates is a contemporary sculpture park which support the truly innovative outdoor sculpture.  I am creating two dead animals–one will be a white unicorn (with a crystal formation for the horn)–made from fired ceramic. The other form will be a life-sized adobe (and cement) buffalo, also dead. I am creating this work to comment on traditional outdoor sculpture that commonly depicts animals–usually, the powerful, regal stag in its prime-is represented (and cast in bronze). I have often wanted to see a nature sculpture that depicts an animal that is aging, for instance. Because, then the work would raise a different type of emotion and/or empathy within the viewer. In the same way the viewer can identify with beauty, she or he can also identify with pain, aging and all sorts of other complicated emotions. So, since I have never seen any outdoor sculpture like this, I decided just to make it myself.

Do you get your inspiration from other sources other than our human nature? What motivates you?

I read a lot about evolution and biology. Much of my inspiration comes from National Geographic magazine. So, I would say I am strongly influenced by theories related to evolution. Because of this, I see animals as being our ancestors, our kin. I am curious about our tendencies that may be subconscious – violent tendencies, in particular. As most people know, chimpanzees are very closely related to humans. And, they can be incredibly violent animals. Acknowledging this may help humans understand our tendency towards violence (from bullies on the playground to wars overseas).

Do you remember your first works? What did you learn from that period?

I do remember my first works, and they were formally, quite bad. But, metaphorically, they were similar–or at least some ideas remain in my current work. Mostly, using animal and macabre imagery remain. 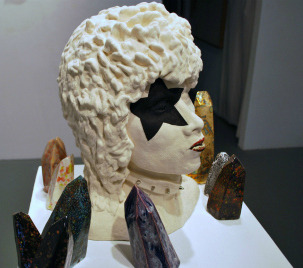 Ceramics Now Magazine: In what techniques do you usually work and what did you learn from working with different materials?

With clay, I usually build a solid form, wait for it to become leather hard, and then I will hollow the piece out. I like this way of working as I don’t have to worry about the piece collapsing and since it is solid clay; I can do anything with the form since the clay is forgiving. For instance, if I don’t like the location of an eye, I can scoop it out (without damaging the detail) and put it back–somewhere else. I think this process is conducive to a more intuitive way of working. I also work with different materials to build sculptures, such as paper mache, chicken wire, plaster, and polystyrene foam. One thing these materials, in particular, have taught me is that they are somewhat malleable–like clay. Chicken wire, for instance, can be expanded or contracted quite easily; it is also additive and subtractive (also like clay). I also like to combine mixed media occasionally with ceramic forms. I may add flocking fibers, fur, gold leaf or decals. This just gives me more options to add contrast to the piece–both visually and conceptually. 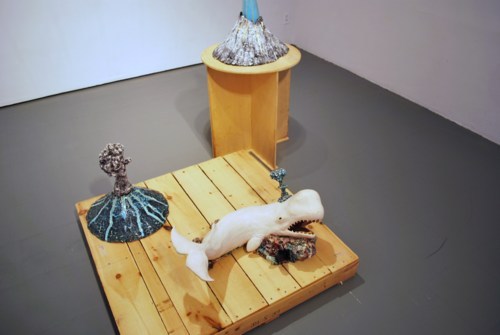 What is your present project, what’s its history and how do you make the pieces

I am making a variety of different work right now–[like the two pieces for Socrates that I mentioned in question # 2]. Other recent work I’m continually building are pieces that relate to Paul Starchild Stanley (the guy with the star around his eye) from the 80’s hair metal band, KISS. I have a show in Canada right now and this piece, titled “Lick It Up” is surrounded by crystal formations (also made out of clay). To me it ties some imagery together that I’m thinking about–the crystals represent the metaphysical or even spiritual aspect of reality. I also have a tendency to make work that seems marred by the era of the 80’s so; the crystal forms serve that purpose as well. Their geometric form adds a formal element of contrast with the figurative aspect of my work–that is something I am also interested in. The big hair and facial make-up on Paul Stanley are funny as well as poignant; to me, it is reminiscent of tribal cultures participating in a ceremony or celebration. The ritual, the performance, the big hair–may also represent a ceremonial mask. But, it is important to me to tie it in with contemporary pop culture–or, at least what was significant in the 80’s. 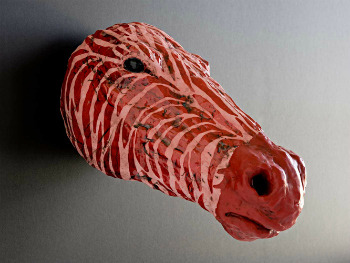 I’m organizing/curating an exhibition that will take place sometime in 2012 at Baltimore Clay Works. It’s called Coiffure and will feature some really strong, contemporary ceramic work. It’s very much in the early stage but, I just received confirmation today that it will happen. I will also be in two shows at the 2012 NCECA. One show is a three-person exhibition titled, Natural Macabre; I’ll be showing with Kate MacDowell and Shay Church.  Another is a show curated by Jacob Foran titled, A Show of Heads. I also have a solo show up right titled, Monster, at Artcite, Incorporated Gallery in Windsor, Ontario, Canada–[that will remain up until August 6th]: http://www.artcite.ca/
And, I’m currently in a show in London at Stolenspace Gallery: http://www.stolenspace.com/section.php?xSec=439

“In my work, I explore images of extinction, death and transformation. I am fascinated with the natural processes of decay and destruction—particularly when in conflict with human systems. Nature is referenced, not by depicting the virile stag, but by illustrating its inevitable decay. Valuing macabre sensibilities, I create sculptures that cross over the slippery edge of life into what might lie beyond.

An investigation of the unconscious mind and our inextricable link to the animal world may reveal certain truths about the human condition. “Lyuba Twins” is a purposely-ambiguous sculpture—the animals, although realistically rendered, are non-specific in species (are they deer, sheep, baby buffaloes)? They are also defined as neither alive or dead. The viewer is invited to interpret the sculpture in a similar way that a ‘subject’ is asked to interpret an inkblot from the legendary Rorschach Technique. As the interpretation of the inkblot theoretically reveals a description of the subconscious mind of the subject, the viewers’ interpretation of this piece may also provide insight. …

Embracing all aspects of ourselves, taking a closer look at the “shadow side” of the human condition is my attempt to discover truth. This truth stems from acknowledging our imperfections and recognizing humanness (and dignity). Comprised of evocative, poignant layers of meaning, I invite the viewer to contemplate what it means to be human, to connect with a deeper side of oneself.” Roxanne Jackson