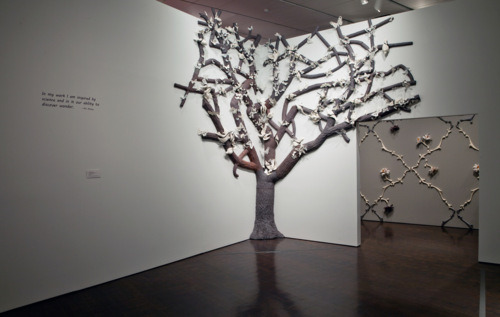 Tell us about Mast Year, the work you exhibited at the Overthrown: Clay Without Limits exhibition.

I chose the Oak, America’s National Tree because it has long been a symbol of endurance and strength. The title, Mast Year, refers to the phenomenon in which Oak trees produce a prodigious abundance of fruit. This proliferation has been recreated with emblems of beauty and nature: birds, butterflies and moths.  Lacking life and using forms present in death such as bird “skins” and insect mounts, the connection between the tree and the fauna (pins and cable ties) highlight the forced, unnatural attempts to recreate the sublime by using synthetic, man-made modes of connection. Historically, swarms and flocks and have been viewed as omens of both luck and death and such sights in nature are rare if not completely absent. The ultimate goal of Mast Year is to invoke something beautiful yet dark that speaks to the fragility of nature as well as the more poetic and undefined feelings of loss and the desire to exert control despite its futility.

Your works have a very strong connection with nature, and you can almost say that they are indeed natural. How come you are exhibiting them in museums? Shouldn’t they be part of a free, wild space?

I am interested in creating sculptures that, while realistic in form, are models or copies. Like plaster casts found in both art and science museums, they stand in for the original that exists someplace else. They are re-creations that reveal and highlight our misconceptions, viewpoints and our “understanding” of the world.

Why did you take this challenge of exploring the nature in a scientific way? Are you trying to replicate the nature?

The idea of replication and recreation is central to this piece. It is both integral to the concept as well as technically significant. In my work, I spend a great deal of time making sure my work is real and factual. I spend a great deal of researching and manipulating my forms so that they are as realistic as possible. I want my work to correlate with a nature “out there” that exists in one form or another. In Mast Year, it exemplifies a nature that we are trying to put back together.

As to why am I exploring nature in a scientific way? I am continually inspired by science, specifically the ideas of discovery and wonder. Albertus Magnus defined wonder as: “Wonder is the movement of the man who does not know on his way to finding out, to get at the bottom of that which he wonders and to determine its cause."

Under this definition, wonder is not a static moment; it is the moment of inspiration through the act of learning and discovering the truth. These ideas are present both as concepts in my work as well as guides for my studio process and research. 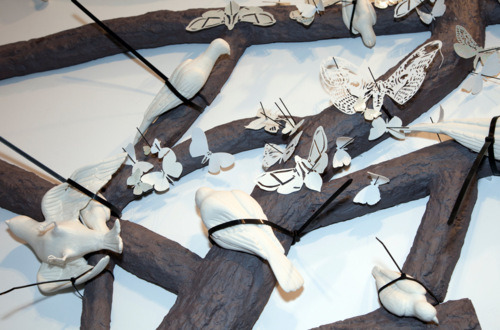 You are inspired by an environment that is eternal – the natural world, but, unfortunately, your works (or anybody’s works), are ephemeral. Are you disturbed by this, or are you happy with the fact that some day your works will be taken away by nature?

I view this as opposite really. For me, nature is ephemeral, and our understanding of the natural world and science is always changing. Part of the reason I work with ceramics (porcelain specifically) is that is a history of delicacy and beauty in tandem with strength and longevity. Ceramics holds up remarkably well while many other things decay. For Mast Year, I wanted to juxtapose fragility with strength both physically and conceptually.

What will you be working on in the near future?

I am very excited to spend the rest of the year back in the studio. I have long been interested in digital tools and how I can use them with ceramics.  For Mast Year, I worked with a material called porcelain tape (Keraflex).  I experimented with a laser cutter and developed a process for cutting and handling the material to achieve pieces more delicate and exact than I could create by hand (the butterflies and moths).  I plan on starting on a series of works that explore these new possibilities and also incorporates 3-dimensional printing.

"The scientific and museum context identifies a system based on order, fact, and discovery. It is within this system of scientific display, process and ideology that my work exists. Museums of Science and Natural History evolved from the curiosity cabinets of the 16th and 17th centuries. These collections were displays of specimens, oddities, art and inventions. They permitted the viewer to relive the moment of discovery and to inspire ‘wonder’. In the 18th century there began a shift, instead of poetic spectatorship objects began to be classified and ordered. Taxonomy gave way to the museums of natural history and the museums of art. I am utilizing the scientific/ museum context to explore the notions of ‘wonder’ and the ‘real’. . In my work, I am inspired by science and in it our ability to discover wonder. In nature, we are faced with a familiar but superficially understood the natural world. It is through such discoveries of wonder and beauty that we deepen our understanding of the inner workings of nature and how they may be applied to our lives.

In Commentary on the Metaphysics of Aristotle, Albertus Magnus wrote: "Wonder is the movement of the man who does not know on his way to finding out, to get at the bottom of that which he wonders and to determine its cause.”

Under this definition, wonder is not a static moment; it is the process from the unfamiliar towards understanding. I am interested in the illustrative, educational representation of objects that reflect the notions of wonder and natural beauty. Nature is an infinite spectrum of such ideas. Through science and mathematics, this world can be delved into, and discoveries of wonder can be made. Through the investigation of scientific processes and contexts, I can present real and imaginary objects that hint at the multi-layered discoveries of wonder, innovation and beauty found in nature. I seek to present the unknown and make the irrational rational.“ Mia Mulvey