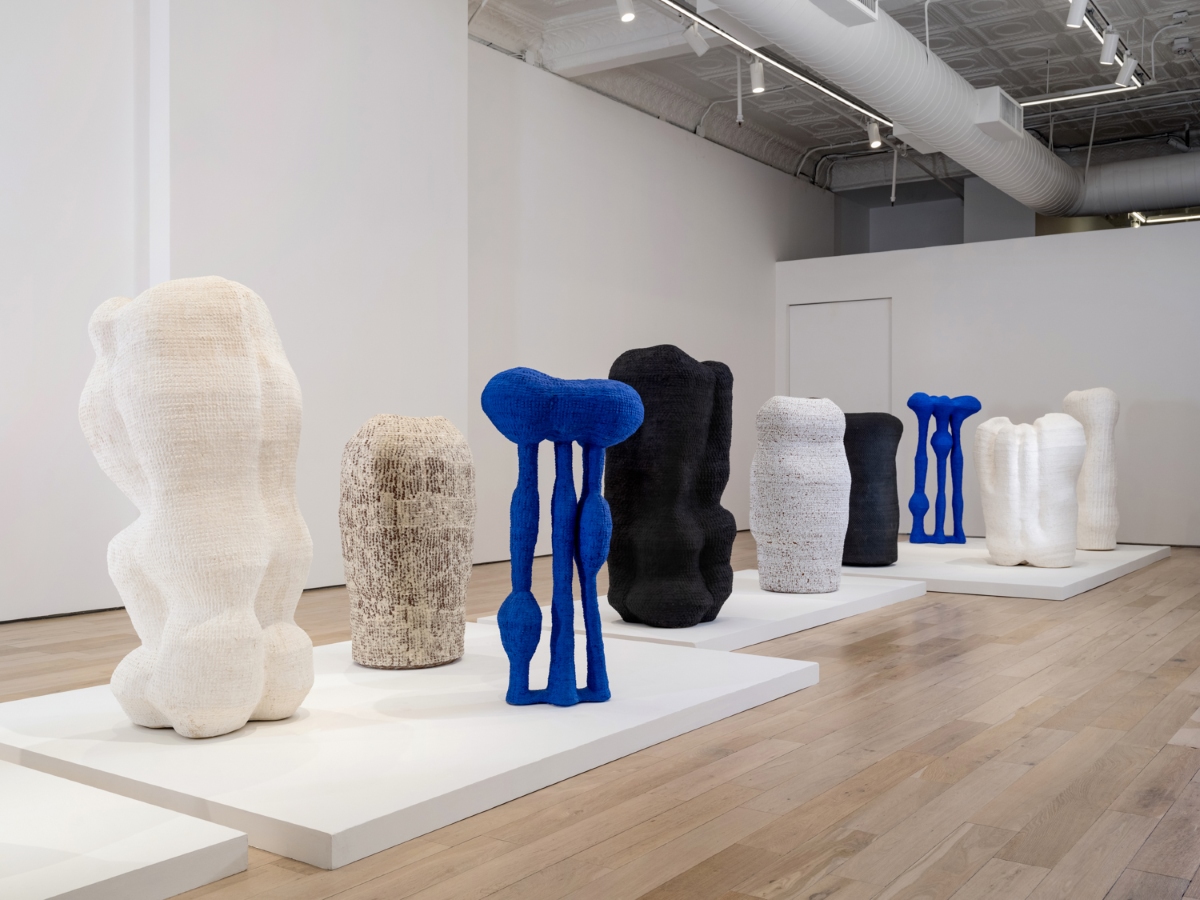 Kristina Riska’s sculptures are deceptively simple. From across the room, the large, undulating vessel forms beckon the viewer with familiarity. As you approach, you feel a resonance with your own body. If we think of ourselves as part of the earth, there is a real connection between our bodies and these person-sized vessels. We are drawn forward as we recognize echoes of our own form. From an intimate distance, closer inspection yields the truth: they are complex studies of life on micro and macro levels, containing the history of humanity and biological life in physical form. They are everything all at once.

Riska explains how her process embodies her exploration of the natural world. “Ideas of growth and repeating were the starting point for the series “beewords.” I have been looking at the bees and other insects and how they build nests by repeating one pattern. They have the model in their DNA, and I think we people have something similar in us. We get satisfaction from repeating and structuring things. Also, the idea – of growing big with small pieces – is fascinating. There is a lot of repeating in my working process.”

Kristina Riska is one of the most celebrated ceramic artists worldwide and in her home country of Finland, where she has worked since the 1980s at Arabia in Helsinki. The Arabia ceramic factory was founded in 1873, and the 1980s began to welcome Guest Artists into its art department to create their own work. As the factory slowed production in 2003, the Arabia Art Department Society was founded to continue the company’s 200-year legacy. Riska established her studio there in 1984, just as she left university. Access to the huge industrial kilns allowed her to work in large scale from the earliest part of her career until now. Those around her at first did not believe she could get her huge, thin-walled vessels loaded into the kilns and through their firings intact, but she had success almost immediately. She established her working rhythm – first making an entire group of vessels in the studio, then preparing them for the kiln, then firing them together so that “they are all part of the same moment in time.” The industrial equipment gave her the freedom to build a formal vocabulary that has evolved into ever more beautiful and evocative forms for nearly four decades.

Hidden, the newest iteration of her continuous growth, is on view at HB381 in New York through January 7. Riska named the exhibition Hidden to describe her process of making over the last few years. “We all carry a private spot inside us, a hidden place. Our thoughts, our history, our desire, who we really are – a source of life, maybe it is the soul. The world is restless and controversial, and maybe more than ever, it is important to find peace of mind to survive in this complicated world. Working is the hidden place for me. Every time I know I cannot work for a while, I feel sorrow. I have always felt that way, but recently I have renamed the feeling.” Making is her hidden place.

When Riska was a child, she was in a terrible accident that significantly damaged her legs. She spent a long-time convalescing, and it was not certain that she would walk again. Her time was spent in bed, with long stretches in her room, where she watched the shadows play across the walls. There was a painter living with her family at the time from whom her parents commissioned portraits of Kristina and her siblings. To occupy her mind during the portrait sessions, and Riska thinks, to cheer her up, the painter gave her some clay. She began right away to make small sculptures and jewelry. From then on, she never stopped exploring clay. Her ceramic work continued alongside painting and other media until she decided to study ceramic art at the Helsinki University of Art and Design.

Each new body of work is part of a logical continuum, expanding from the earlier work. For this show, Riska worked on two themes: beewords and women. “Some works are more or less abstract interpretations of a human head with the hidden empty space inside. For these, I have given names of women who once were somehow meaningful or distinct.” The women Riska honors with named vessels range from the most famous women in history, like Cleopatra (Kleopatra), to others who deserve more attention than they have received. Sei Shōnagon was a Japanese author, poet, and lady-in-waiting who served Empress Teishi around the year 1000 during the middle Heian period. She was the author of The Pillow Book, the best source of information about Japanese court life in her period. Alma represents Alma Mahler and Alma Kuula, talented musicians who were each married to, and overshadowed by, famous composers. Artemisia is named after Artemisia Gentileschi, one of the most gifted painters in Baroque Italy, whose reputation has only recently been raised to a deserving level. Riska feels that naming these women contributes to their legacies; as long as people talk about them, they are not forgotten.

It is by tiny acts that great things can be accomplished. Riska’s vessels are made of countless small coil-building marks. Another experience when beholding them in person is awe at the sheer number of hand movements necessary to create each form. These are marks of effort and also marks of time. The earthy, visceral relationship your body feels to work is paired with a sense of wonder at the amount of time and skill represented physically here.

“I like to work with very small movements. I like the idea that there is this paradox between how I work and how physical the pieces are. If I did smaller pieces, they would be too neat or too sweet. It’s the combination of these two things – I work with small moves, and the works are very big and physical. I like the idea that I feel the working process physically. That it is an effort, a challenge.”

“The way I work is kind of like my handwriting. I have the feeling that I am writing, that I am making these marks. This type of repeating is very deep in our DNA and reflects the work of bees.” Riska relates the small movements of handwriting to the microenvironments of small insects, thus connecting the two bodies of work in Hidden. Her handwriting gestures serve as the written history of these chosen women, and at the same time, she is honoring the way the bees are writing their history in their hive making. They can never forget what it is to be a bee, and it is imprinted in their genetic makeup. We, as humans, are writing our history so that we don’t forget what it is to be human. Riska connects the efforts of the smallest creatures on the planet with the vast sweep of human history. That which we believe to be grand and important, immutable even, is something that can too easily be lost.

Standing in front of the impressive group of Riska’s sublime vessel sculptures in the gallery, they seem to be wordlessly holding memories and knowledge of the natural world and human history. The small movements, the emotions, and the intentions of the artist as she built them impart to the viewer a feeling of shared humanity and belonging that is particularly welcome after the last two difficult years. Kristina Riska creates forms that remind us that we are connected to each other from across time and deep into the natural world.

*This essay is a reflection of the author’s response to Kristina Riska’s artwork, as well as excerpts from conversations and email correspondence between the author and the artist over the last few months.

Jennifer Zwilling is the Curator and Director of Artistic Programs. She joined The Clay Studio in 2015 and administers the Resident Artist Program, Exhibitions, The Collection, and the Guest Artist in Residence Program. She earned her BA in History from Ursinus College and MA in Art History from Temple University, Tyler School of Art. Previously, she was Assistant Curator of American Decorative Arts and Contemporary Craft at the Philadelphia Museum of Art. Jennifer developed and taught History of Modern Craft at Tyler School of Art for ten years and has taught and lectured around the world.

Ulrica Trulsson: From Snow to Sand at Sabbia Gallery, Sydney