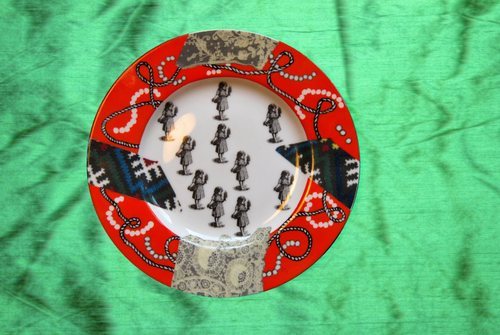 You are a versatile visual artist who works in mediums such as painting, collage, video art, but also ceramics. In the process of creating a new work, do you allow yourself the freedom to change the medium of expression?

Versatility it’s not entirely a positive feature, at least not for an artist. To be consequent could be in many cases a better option. Up to this moment, my flexibility didn’t create a strong image of myself, but instead surrounded me with an aura of strangeness and ambiguity.

Changing the medium could be an important, valuable quality, mostly when you’re forced to work in difficult conditions. For example, if you don’t have your own kiln or the brightest and most refined porcelain, you have to improvise, for example to do installations of found or smashed objects. If you record the process on camera, you also have good chances of becoming a video artist or a performer. I don’t feel like it’s hard to transfer one idea between different types of media, but it is quite frustrating. I have always imagined myself doing heroic jobs, but I have to acknowledge my limitations and therefore pay attention to small or discreet things. From this point of view, things become even more ambiguous.

Are your creations the results of research processes or they are on-the-spot transpositions?

Sometimes they are, sometimes they aren’t. Let’s say I like spontaneous ideas. I don’t bother that much with research. I’m always intrigued when someone titles his collection of exhibited images a project, evoking some ideas he is attached to. If you’re honest to yourself you will notice how clear everything is. Everything you do comes from a background. I will give you an example: some years ago I developed a project on an accidental idea. I asked two of my friends, a poet and a monk, to start an artistic collaboration, taking advantage of this multidisciplinary friendship. The monk opened a book and picked a word for a theme. The poet had to write something regarding this, and I had to paint or draw. Almost from nowhere, an idea appeared: smashing watermelons! Then I started the research, amazed by all coincidences I had found. This innocent image had a huge iconography and transgressed many cultures. It was like a revelation. 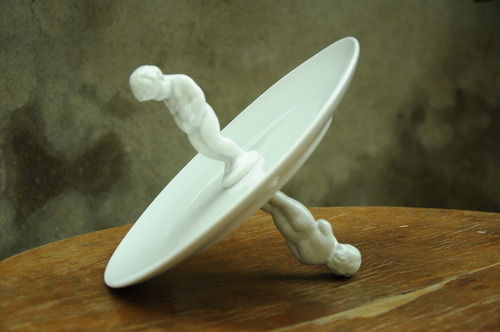 Bogdan Teodorescu, This is the best world from the others, 2012, Porcelain, feldspat, approx 27 x 28 cm.

Currently you are working with Wagner Maison de la Porcelaine, Bucharest. Tell us more about them.

Wagner is a small workshop specialized in decorated white porcelain. I would say it’s already a brand on a local scale. The entire business started a few years ago, when Ana Wagner decided to change the medium of her drawings and illustrations from paper to porcelain. Later on, her sister joined, supporting her as manager and PR agent. As far as I know, no one did this before in Romania and I think it’s an amazing initiative, simply because it tries to reconsider traditional dishes and because it keeps them up-to-date with the demands of the contemporary market. Most of the people don’t pay much attention to the style, shape or label of their dishes. Almost all Wagner products are dishes, but they also make jewelry and lightning accessories. Many of them depict illustrations, but some of them go further and closer to independent art. For me, Wagner was the right opportunity to develop my connection to ceramics, even though I had to remain faithful to the company. Of course, I imagine that one day Wagner could free itself from these constraining economic conditions.

Although not widely practiced in ceramics, the collage technique gives you a fantastic freedom of expression. What was your first contact with this technique?

My first collages were made in my childhood and were, of course, outside any sophisticated concept. Every time I stumbled upon a new object, an interesting color or image, I felt the need to record it somehow. I remember three postcards made of pistachio shells (a rarity in the Romanian 80’), my parrot’s fallen feathers, and pieces of one of my best shirts, which I remember as one of my best outfits. The first major experience I took on collage was in the year 2000. It was supposed to coincide with “the end of the world”. I made more than two hundred collages, trying to work as much as I could and to save everything I considered worthy to preserve. I cut off tens of magazines – fashion, nature, supermarket advertising fliers, labels taken from my jeans. Collage permitted me to get closer to some of my ideas. These collages were like little projects. Thinking more “economically”, collage was the best solution to melt everything without the risk of a disruptive, mixed-up feeling. 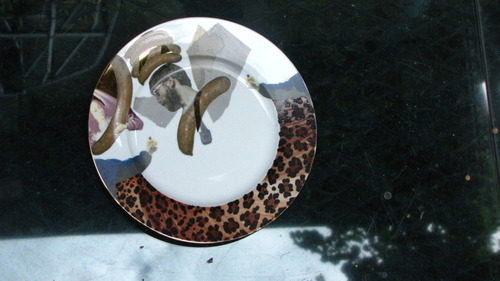 What are your future projects?

I have lots of projects, but I fear they will not come to life very easily. That’s simply because I’m not in the right place and maybe not in the right moment. It is impossible to do everything at the same time, and I am aware of it. I dream that at least a small part of my projects will be achieved.

I have two projects planned for this year, and both are already ongoing. The first is titled “Headlines/ The most important,” a show of painting and photography related to the subject of perception. The second is a bit more ambitious. Titled “Tiger. Watermelon,” the show brings together artists from Romania and Spain. I also plan to do a ceramics show, maybe in Cluj. I would really like to reiterate my connections with this city, which is becoming an internationally renowned artistic center.