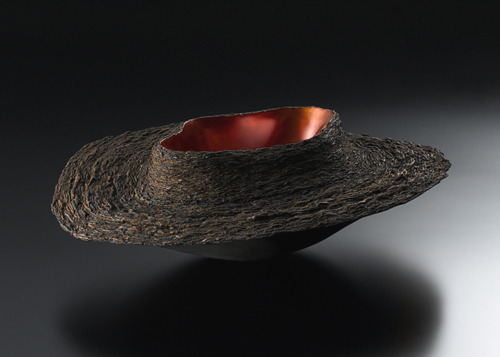 Not many people know that lacquer is used to make art pieces. Can you tell us more about this material and how do you use it?

The Urushi tree (Rhus Vernicifera) is a member of the sumac family of trees, found in various parts of Asia. The trees produce the sap which has been used as the coating and the adhesive material in Japan more than 9000 years. A poisonous substance when in liquid form (causing skin irritation), it becomes non-toxic on hardening and is waterproof and acid-proof. There are some examples that Native American use the sap of sumac, poison ivy or oak with the same purposes.

The season for harvesting sap is from June to October, and an Urushi tree must be between 8 to 13 years old before it is mature enough to produce only one cup of sap. The sap, an opaque light brown color, oozes from the slashes on the trunk, and it’s carefully scraped with a special tool; after this process the sap is called Arami-Urushi. The Sap is stirred and carefully heated to equalize its components and remove excess fluid. Those Urushi is called Sugurome-Urushi or Kijiro-Urushi and used as the coating material for the upper layers.

The drying system of Urushi is very different from other painting materials. Drying Urushi means to harden. The laccase enzyme reacts in Urusiol which is a hardening constituent and initiates a chemical reaction: oxidation polymerization. To increase the activity of the chemical reaction, the ideal temperature is 77F and the moisture set to 80%. That means if the air is too dry, the lacquer never gets dry.

I focused on this characteristic drying system on Urushi and pursued to create the sculptures called layered forms. I daringly remove other elements in Urushi crafts, because they might interrupt my essential concept for my layered form series. However to understand what is lacquer or lacquer art, I should not deal with only unusual dying systems of Urushi, but also should focus on the traditional techniques, because sometimes we can find the answer in the techniques that were sophisticated and established by our forefathers. For the reason, I worked hard to acquire techniques like woodwork, dry-lacquer, colorings, coatings and decorations. 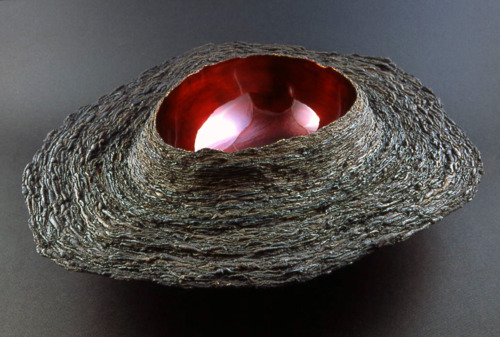 Your work is practically constructing itself in two years time, using raw lacquer and grated diatomaceous earth. Do you make interventions during this time, what can you tell us about the process?

In my production process, I start with a base form of plaster (gypsum), and the rice glue is applied on the surface of the plaster, and then build up successive layers of Shitaji (base coat) which is the mixture of finely grated diatomaceous earth and lacquer on the outside. Only one thin layer (o.5 mm) can be applied each day per piece, as lacquer takes time to dry and harden. Eventually, I remove the plaster base, which leaves an interior void. I then coat the interior of the vessel and apply the gold leaf. To create the depth, additional seven or eight layers of brownish clear lacquer are applied. After I finish the interior, other many layers are added on the outside. The weight is about 20kg for the large pieces.

When I was creating the layered series, I was always working from 3am to 6am because I was feeling sacred in the tranquility of the night. I could feel that these three elements: lacquer, environment, and the human being were connected tightly, and it was truly hours of bliss for me. So I haven’t felt any difficulty when I was making the layered forms for two years. 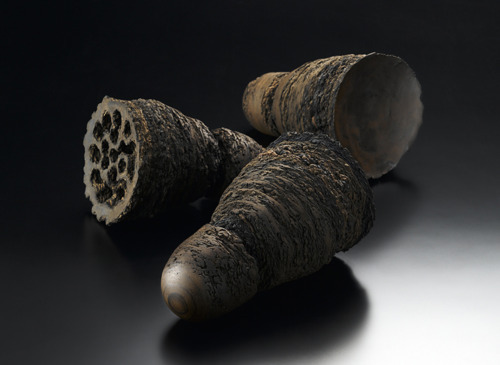 We know that you draw inspiration from nature, your works being organic and reflecting natural forms, but what keeps you going?

The human being, the earth, and fire come together to work with the nature to create ceramic works. I think that we can’t control the natural phenomena that are happening in the kiln, but those happened inevitably. I am also letting the natural phenomena and inevitability to interfere in my lacquer sculptures. I had many failures until I realized that should harness the power of natural phenomena, and I should be looking for forms in the nature.
What are the natural phenomena and inevitability for the lacquer works? I realized three things. First of all, Shitaji (the base coat) is the natural material that can be applied only 5mm of thickness once a day. Second of all, since the temperature and moisture are changing day by day, the color and texture of each layer are varied delicately. And the last, the organizer of all those processes is the human, which is me. In other words, inevitability is the result of the deduction of unnecessary elements. More to the point, when three elements, which are lacquer, environment, and human being are working together, wonderful pieces are born. 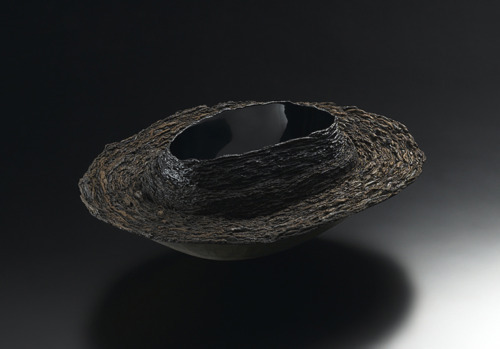 The uniqueness of your work made you a world-recognized artist. You had many exhibitions in the last years, tell us about your plans.

I was rather passive recently, so I want to be active and create a new series this year and in 2012. I also want to research about the lacquer genus that is growing in the United States.

FUJITA Toshiaki began working in lacquer when he was a student at Tokyo University of the Arts, because he was attracted by what he calls the mystery of urushi, the name of the natural resin from which lacquer is made. After various experiments, he began to create his signature layered forms. This involves the application of a finely ground fired clay mixed with urushi (a base cost known as jinoko) every day for two years. As these myriad layers dry, the forms increase in size and develop an organic quality as if they had grown naturally. These dark, irregular layered forms, with contrasting bright interiors of red lacquer or gold leaf, were immediately praised in Japan’s art world for their unique embodiments of the synthesized concepts of both the natural urushi tree and the beautiful lacquer art it produces.