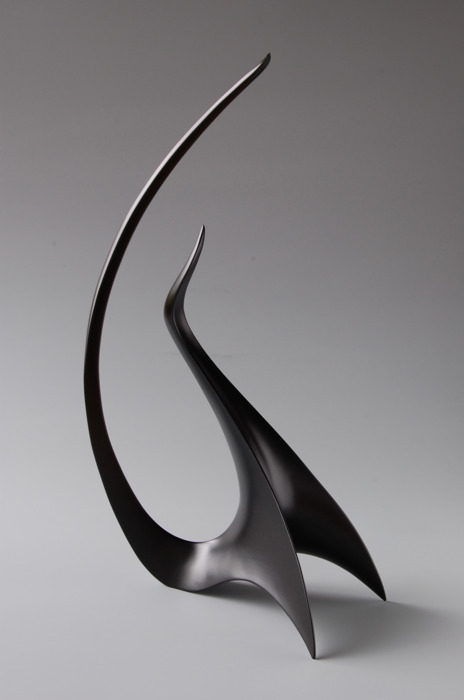 You are a very young and talented artist. What was your first experience with art and with lacquer?

I wasn’t exposed to the arts that much and didn’t know about Japanese lacquer work very well until I entered the art collage. I was interested in design and woodwork working and wanted to make the furniture for our daily life when I was a teenager. When I was a sophomore student, I choose the Urushi department for my major, but it was something uncomfortable for me. At first, I made many chaotic pieces. However, those pieces are supposed to be an origin of my work today.

Your works have an extraordinary sense of space and light, their shadows contrasting with the colors and the surroundings. How do you make these fantastic lines of dark? It has to do with the slim silhouettes of your works.

I simulate the three-dimensional shapes in my mind, for example, how lines will be flowing or how they are placed on the pedestals or attached to the walls. I believe that only lines that look beautiful from any angles can make the lithe and sharp silhouette. 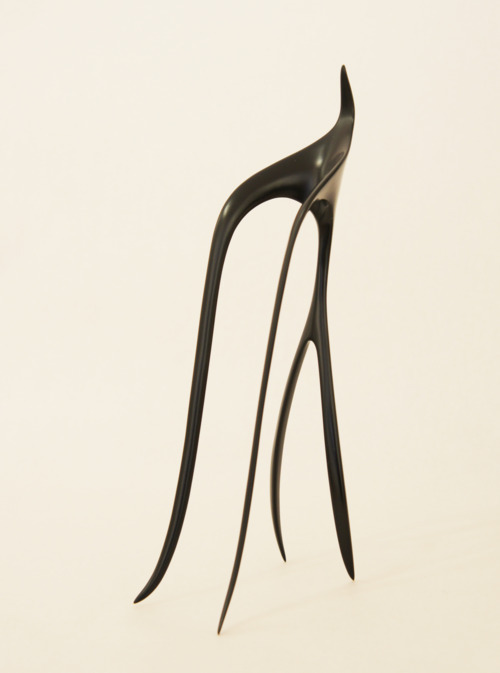 Talking about Silhouettes, what can you tell us about this series, “whose lines twist and turn, swell and fade, like the sounds from a musical instrument”? Tell us about the constructing process and its motifs.

I use maple wood for my work, because it is flexible and doesn’t snap easily, though it is hard and difficult to carve.

I got a lot of inspiration from nature’s creatures. I currently live in Toyama prefecture in Japan and it is filled with the beauty of nature and many birds and animals play around my house. We can encounter snakes, wild cats, weasels or frogs every day. Since I was raised in a farmer’s family, the circumstances were not very different, but after seven years of collage life in the city, the nature in Toyama was just perfect for me. I think that everybody has memories or episodes with the animals in the bottom of their heart, but we usually don’t think about that very frequently. I am very happy if the audiences evoke those memory while they are looking at my pieces. 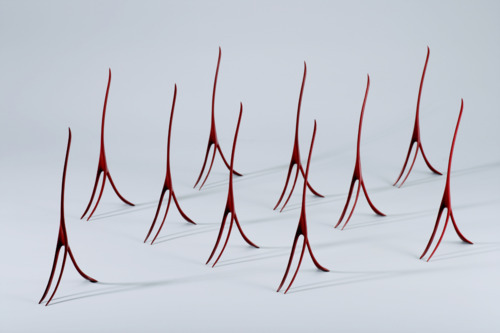 Living in Kanazawa, a famous entertainment district, exposed you to images of courtesans whose extravagant attire and richly ornamented hair styles had captured a little bit of your imagination. Where else do you get your inspiration from?

I have lived in Kanazawa for seven years, but haven’t seen the real Geisha. However when I was looking at a book for woodcuts in the library in the collage, I found the images of s Geisha decorated with the gorgeous hair ornaments. Those images grabbed my heart and I immediately decided to make the Urushi hair ornaments. (Actually, if I think better, I made them four years later.)

What can you tell us about being a young lacquer artist in Japan. Are you a full-time artist?

I am working as a part-time teacher in a middle school as well as a conservator for the cultural heritage in my prefecture, because it is hard to live as a fulltime lacquer artist.

I have been working as a lacquer artist for about ten years, and really appreciated the supports of many people. My artist friends asked me to join group exhibitions or to introduce myself to galleries, so I truly can’t thank enough to those friends. I also feel that I could help young artists who are struggling.

I will have a solo exhibition at KEIKO Gallery in April 2012. 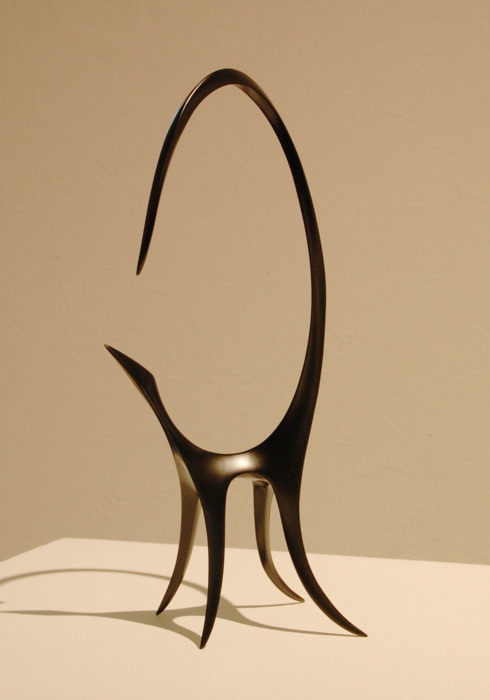 Among an increasing number of well-trained and gifted young Japanese lacquer artists, Murata Yoshihiko’s work relies heavily on the external play of light that creates silhouettes which continue his forms and flow indistinguishably from the sculptural pieces themselves.  This engaging illusion teases one’s perception of where the black lacquer ends and the shadow begins.

Like his slender anthropomorphic forms, his occasional use of the contrasting brilliance of raden (mother-of-pearl) reflects his early fascination with the exquisite hair ornaments once worn by Oiran, the high ranking goddesses of Japan’s traditional entertainment world.  As a student in lacquer at the College of Art in Kanazawa, a city once famous for its entertainment district, he was exposed to images of these courtesans whose extravagant attire and richly ornamented hair styles had captured the imaginations of most artists of Ukiyoe, wood block prints of the Floating World.
After the form is carved and made smooth, he applies more than 20 coats of lacquer, each coat of which is polished, requiring several months to complete a single piece. It was his satisfactory mastery of lacquering that led him to develop his recent lyrical Silhouette Series whose lines twist and turn, swell and fade, like the sounds from a musical instrument.