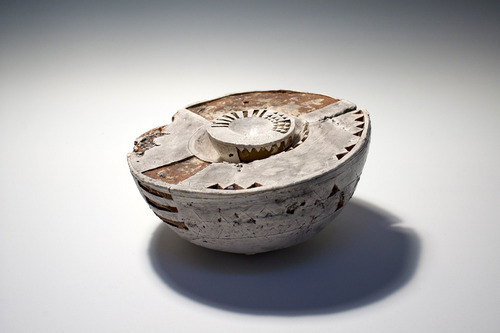 How did your experience in working on archeological sites in Jordan and Ethiopia influenced your work?

My work in Jordan and Ethiopia profoundly changed my work. I went to Jordan between my undergraduate degree and my graduate degree. At that point, I was already serious about clay, and although my early training had a functional emphasis (the well known American potter Warren Mackenzie was a teacher and influence), I had become more interested in sculpture. But my work had little focus and I was frustrated by what I saw as the triviality of my work. It didn’t seem to have a core or substance.

Before University, I had been an exchange student in Norway and had learned a lot about history, arts and culture there, but had not put it to any good use. However, when I went to Jordan, two things happened. I traveled all over the region – into Syria and Israel, and throughout Jordan, notable the amazing Petra. I was deeply impressed by the ancient culture and the design of the buildings and tombs and the handmade objects resonated with me. I understood finally that there was a connection between people and cultures and it was in a way manifested through the visual vocabulary around me. It related to the textiles of Scandinavia and the work that I had done as a kid. The desire to create some order, through geometry, on the natural world, and on roughly hewn stone and constructions seemed universal.

My other experience there that had a huge and lasting impact on me was the excavation itself. At Ain Ghazal, working in a “square” (archeological sites are frequently divided into precise squares so as to map out the location of a find onto three points in space) and seeing how the layers of the earth marked time and culture, hiding, or harboring, the evidence of past people was exciting to me. I recognized and felt awed by all of the people who had come before me. Ain Ghazal was first settled about 7250 B.C., during the so-called Pre-Pottery Neolithic B (PPNB) period. The result of our excavation was the discovery of a diverse assemblage of symbols including tokens of many shapes, animal and human figurines, modeled human skulls, “monumental” statues and mural and floor paintings. My square had a beautiful floor painting of iron oxide on plaster. During the final days of the field season, I worked to uncover the floor. As a ceramic artist, discovering a plaster floor painted with iron oxide, the same Iron oxide that I used so often in my work, was a thrill. But more significantly, as I knelt, sweeping the dust from the floor, I felt a profound sense of connection to the women who had lived there 9000 plus years before. I knew that we had shared many of the same feelings and concerns; I felt connected and understood that there was a huge chain of humanity of which I was a part. I still get goose bumps thinking of it. And that sense of our common humanity is what still informs my work today.

My subsequent adventure was in Ethiopia. I am very fortunate to have married a man who works at what is called the “Lucy” site in the Afar region of Ethiopia. Lucy is an Australopithicus afarensis, and her species populated that part of Africa between 3 and 4 million years ago. She is pat of our species ancestry. As one scans the ground for fossils, walking in the same rough wadis where our earliest ancestors walked, the sense of our history coming to surface is very powerful. It’s a beautiful place, though drier now than it was when Lucy lived there. It is very quiet and empty, and potent with history. 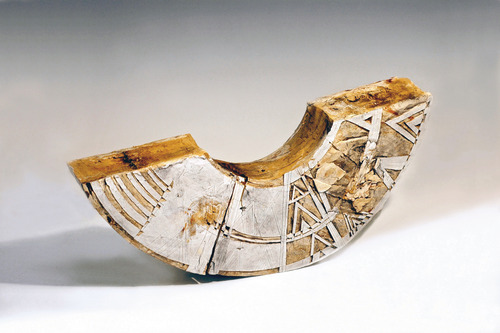 Coming from a Western culture, how did you relate to the history of those ancient places?

One of the most important means of education is travel. Through travel, the perspective that I gained on my country of birth and its relationship with the rest of the world changed my way of thinking and being dramatically. I think that it is too easy to see the world only through the lens of your own country’s issues and attitudes. The depth of history in the Near East, the long tradition of arts and scholarship that influenced the world long ago made me so much more respectful of that culture and aware that my own perspective was very narrow.

You work with great delicacy and rafinement. How long does it take to create a new piece; what materials do you use? Tell us about how you prepare, manipulate and make the finishing details.

I work on a few pieces at a time. I work almost exclusively with found, reclaimed, and repurposed clay. As I am interested in conveying a sense of shared history in my work, the notion that I am using clay which another artist has already manipulated feels right to me. I gather slop clay from art centers and schools, break the clay down and spread it on large plaster slabs to firm up, or pour/push it directly into tar paper, wood or plaster forms. I live in Arizona, where it is very hot in the summer. This heat helps the drying process go fairly quickly, but the larger forms sit up to a month before that are ready to carve. Small forms are ready the same day. I like to take advantage of the heat and its effects on the drying process. The shrinkage and cracking that happens seasonally are part of my process.

After the piece is firm, I use trowels, scrapers and sculpture tools to refine the form, then paint on a white or light colored slip. When the piece is leather hard, I use a fine stainless rib to incise lines and carve out my marks. I work in response to the form, without a plan or template. After the piece is bisque fired I usually apply iron oxide and manganese dioxide washes and sometimes spray it with a frit before firing a final time. 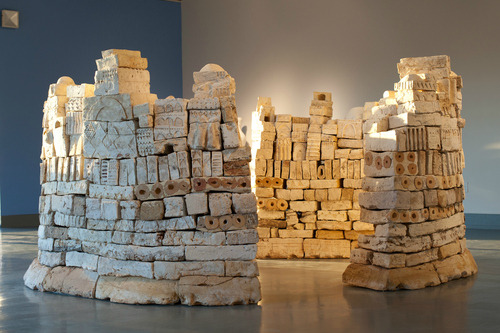 Your recent project, “Citadel”, is inspired by the Citadel of Erbil, the capital of Iraqi Kurdistan, one of the longest most continuously inhabited city in the world. Tell us about the concept of the project.

Erbil is now the capital city of the Kurdish Autonomous Region. A citadel incorporates, protects, covers, and stratifies generations. It is a potent visual symbol and living historical artifact that motivates my work.

The region of Erbil was initially settled by the Sumerians, as long as 10,000 years ago, and there is archeological evidence of habitation of the Citadel as old as 8,000 years ago. The Citadel has been continuously inhabited ever since. Five years ago, I saw in the New York Times an article about Erbil, its historical significance and its vulnerability. When I saw an aerial photo of the Citadel, I knew that I would be incorporating that image into my work. The Citadel itself sits in the center of the modern city of Erbil, which has grown around it in an exponential fashion. The roads leading away from the Citadel, spiral away in larger and larger circles. Erbil is a living example of a community that has grown through time. It has absorbed the cultural artifacts of innumerable inhabitants and has been in the pathway of many of the great developments in human civilization.

As the concept for Citadel began to take shape, I imagined a room size structure, comprised of many layers and bricks that would reflect the growth and development of culture and technology, not just in Erbil, but of human culture more broadly. I used the stratigraphy I imagined at Erbil to represent a universal layering of information and history and memories. The fact that the area around Erbil was clay bearing and that there had been a ceramic industry in the area for centuries further intrigued me. I imagined the earthen walls that support the Citadel at Erbil were full of pottery and artifacts made by potters through the centuries.

As I began to understand that this was going to be a large project, I applied for an Arizona Commission of the Arts Project Grant. I was fortunate to receive this grant, and with the financial support that the grant provided, bought the materials necessary to begin. I looked at different locations to start construction and looked into exhibition opportunities. And also, I contacted everyone on my mailing lists and my students at Phoenix college. I told people what I was planning and invited them to participate.

I have just completed two new bodies of work and am hoping to start a new installation with a working titled “Walkways”. I am applying for grants to help fund what I expect to be a large, community based project. “Walkways” will explore the immigrant experience and transitions of people between places.