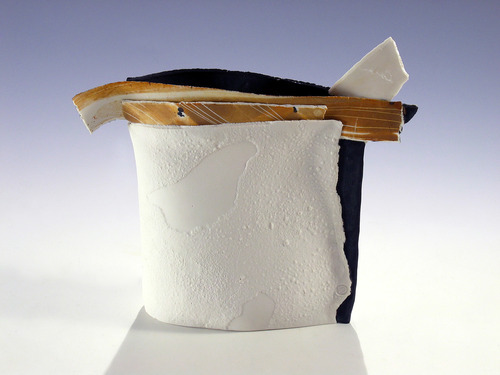 In 1975 you graduated Ceramics at the Nicolae Grigorescu Arts Institute in Bucharest. You have been active in this domain for over 35 years, all marked by a large number of exhibitions, as well as participations to international symposiums. How was this passion for ceramics born? Have you had any masters that marked your career?

In the Music & Fine Arts Highschool in Craiova, the teachers Şopov Cole Nicos, Ion Marineanu and Vasile Buz have inspired me a love for painting as well as for molding. I fell in love with our prehistoric ceramics and from then on I knew I would dedicate myself to this domain.

In the N. Grigorescu Arts Institute in Bucharest I had the privilege of meeting remarkable teachers: Lucia Ioan Neagu, Costel Badea. I learned something from each of them, namely to learn as much arts history as possible, to investigate, to experiment and to be creative at the same time, to not plagiarize, to know that talent had no significance without daily work, and that only the well made work, the passionate one – can lead to performance.

Being fascinated by the renaissance techniques in painting and by the technology of ceramics – like I was then, I used to work all day long in the Institute with the love and the exigency that have been taught to us by our professors.

The material that you most often work with is porcelain. What determines you to prefer it to all others? What are the artistic proprieties of porcelain that makes it more suitable for you than any other material?

In the ’70 and the ’80 there was collaboration between the arts institutes and the factories in the country that specialized in porcelain, tile, sandstone, glass and other materials. The students used to make their internship and their diploma works there, benefiting from what is vital for an artist: the specific materials and technologies. My love for porcelain was born there as a challenge. Only the ones who have knowledge in the technology of ceramics can comprehend how difficult it is to achieve performance when porcelain is the material of choice. It is a difficult material, hard to manage, because it has a memory and you have to know with precision the distortions, the contractions, the burning curves, when you want to obtain something in particular. Everything is fascinating about this material: the pure white, the translucence gained by the thinning of the fragments, its resonance when it is well burned, its preciousness.

You are the founder of Galateea Gallery, the only gallery in Romania dedicated to promoting contemporary Romanian ceramics. What is the Gallery’s history and what are its projects?

In 1953, the Artists Union in Romania is granted the use of the space for an exposition hall. In 1955, arh. Eugen Vernescu arranges it to host painting and sculpture expositions. Twenty years later, arh. Mircea Coradino dramatically modifies its interior and façade, and the art critiques Mihai Ispir and Mihai Drişcu titled it Galateea Gallery.

Starting with 2011, due to my initiative and the concentrated efforts of a group of ceramic artists, whom I want to mention here, Galateea specialized in contemporary ceramics and enrolled in the international circuit. The group that coordinates the Gallery’s program is formed from these artists: Georgiana Cozma, Gherghina Costea, Ioana Şetran, Cristina Popescu Russu, Vasile Cercel, Romana Mateiaş, Aniela Ovadiuc, Adela Bonaţ, Bianca Boeroiu, Simona Tănăsescu, Monika Pădureţ. The Bucharest City Hall, The Artists Union in Romania and some other sponsors have sustained the program financially.

Future projects are all directed to promoting contemporary Romanian ceramic arts by developing partnerships and collaborations with international galleries and related centers. We wish it to be a place where young ceramists can make their debut and can be promoted, where established artists can be introduced, and also a space for paying tribute to masters; a place to generate dialog between the artists and the public, holding debates on the ceramic arts perspectives in the international context and on the new concepts born from the relation of ceramics with other domains of visual arts.

The program, which is posted on the Gallery’s blog, will include personal and group exhibitions of Romanian and foreign ceramists, as well as of some guest sculptors, painters and illustrators who are working with ceramics. 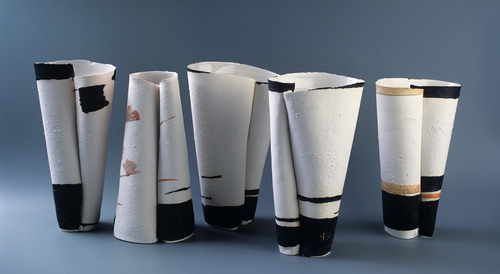 You are also a member of the International Ceramics Academy of Geneva and of International Contemporary Ceramic Art Vienna. By comparison with the international ceramic art scene, what is in your opinion the status of the Romanian contemporary ceramics?

In 1999 I was invited for the first time at a great International congress of ceramics in Amsterdam, ”Ceramic Millenium 99“, along with some friends of mine Marta Jakobovits, Arina and Cornel Ailincăi, when I realized that we, the Romanians, were just about nowhere – that we had no visibility. I was impressed by the discourses of some great masters in the art of ceramics, by those of gallerists, museographers, and also by the special films dedicated to ceramics. The Japanese and the Koreans’ works were triumphant.

Only a few names of Romanian ceramists were known, and that was due to their international awards, which is not much compared to our potential.

The Romanian contemporary ceramics has made itself known thanks to the promoting it received from those artists who participated in the last years to various international meetings and symposiums in China, Taiwan, Estonia, France, Holland, Denmark, Japan and Turkey.

Solely they were the ambassadors of Romania in the world of ceramics, by their own efforts and with a minimal support from the Ministry of Culture or the Fine Arts Union. I have become a member of the prestigious ICA – Geneva, as well as the ICCA – Vienna, to make the Romanian ceramic art known. In order for us to gain a considerable and well deserved position, we need a state policy that truly encourages and supports this domain.