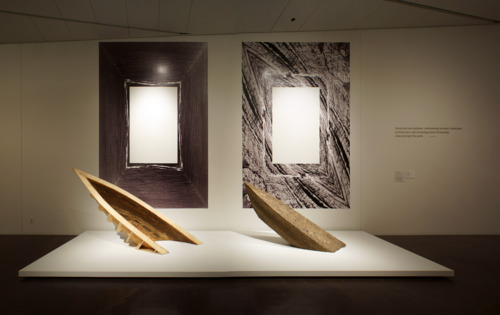 You use many materials and different techniques when making your works. What did you learn from the process?

The earth materials (and photo images) used in The Sea Within The Land/Laramide were based upon paleogeographic research of the site.  A lot was learned about the previous landscapes and geologic materials/processes involved and their relationship to the current central Colorado landscape.  These materials (as are all) have many narratives or stories that can be viewed through one lens or another.  The lens I am most familiar with or knowledgeable is geologic transformation, history and process which informs my relationship to the materials and how I might work with or present them.  For the mold/casting sculptural element, I used a variation of an unfired rammed earth process, this state of materiality is copasetic with the very low degrees of lithification and metamorphism of the sediments relative to the geologic and landscape concepts used in the project.  I often look for analogs to natural processes for how I might interpret how to work with  materials or sites.

What’s your connection to the sea, to the magic and eternal world of the ocean? Your work, The Sea Within The Land/Laramide, approached this matter.

A basic idea of this project is that in many ways the ocean and the land are analogs of each other, so in this regard the land is also magic and co-eternal as well as co-mutable and co-evolving.  I think it is really beautiful that much of the land in the middle of North America was the result of marine depositional processes, sediments slowly settling or precipitating and consolidating on the sea floor.  Two selections from poems of the poet Gary Snyder have been very inspirational to me for many years have resurfaced and found their way into recent lectures:

Red ooze of the North Pacific – only shark’s teeth and the
earbones of whales.  An endless mist of skeletons, settling
to the ocean floor.

(What Happened Here Before, Turtle Island, 1974)

In the Colorado area during the Cretaceous, the Tethys Sea, an incursion from the south (now Gulf of Mexico region) merged with the Mowrey Sea from the north to create what is called the Interior Seaway, rich with Mesozoic dramas of life and death and an ongoing erosion of the surrounding land sending clays, silts and sands into the sea, later to be further eroded by human agency in the Holocene and transformed into brick, paving, artifacts and re-deposited as the Denver built environment, which is currently undergoing erosion… the cycle continues.

Why did you take this challenge of working mainly on site-specific projects? Do you find it easy to express yourself through the openness of the space, rather than to an exhibition space?

For me these spaces are really the same space, it is difficult for me to see architecture (or space definition in certain terms) without considering the origin of the materials of the building itself and some relationship to the space it encompasses.  A building for me is a landscape made out of previous landscapes, which has an effect on the space, either of the building or its paleogeographic history – how that transformation (from one landscape to another) occurred through this lens, is the product of generations of climatic systems, earth forces and human agency to name a few  (see question 2 above).  This attitude, I believe, is a basic extrapolation of more familiar site-based strategies.  In this sense, it is not really a question of ease or expediency more of perception, extrapolation, and intrinsic relationships. 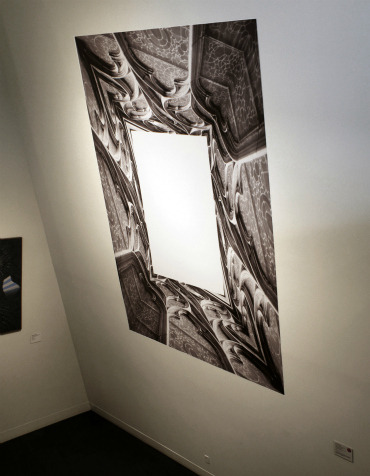 Ceramics Now Magazine: How long it takes to make a project like this? (ex: for the Overthrown exhibition)

Gwen Chanzit, curator of Overthrown, visited my studio in mid- 2010 and invited me to so site research and photography in early December of that year to further develop a basic idea I was interested in to work the the central Colorado landscape and my previous knowledge of what is called the Cretaceous Interior Seaway, an broad incursion of the ocean into the middle of the North American continent about 90 million years ago and that some of the current landscape would be made of sediments deposited at that time.  The themes of Sea/Land, Land/Sea, Sea/Sea and Land/Land is intrinsic to my work.  As in this project, 6-9 months are typical due to an often complex array of research, gestation and implementation.

Where can we find you and your works in the next future? What are your plans?

I am working on several projects, one hopefully for the Exporatorium in San Francisco when it re-opens along waterfront, a couple of public art projects in the works for many years in Oakland, CA and Minneapolis, MN, that may come to fruition this year or next and a lot of on-going research for other works.  One thing I am hoping will happen in a panel/conversation for NCECA Seattle 2012 with John Delaney, a scientist  from the University of Washington, working on an amazing project that includes a huge array of real-time sensors gathering data on the active Juan deFuca plate off the coast of Washington – forces driving the evolution of the North Western North American landscape, the eruption of Mt St. Helens, growth and potential activity of Mt. Ranier and other Cascade Range volcanoes, etc. 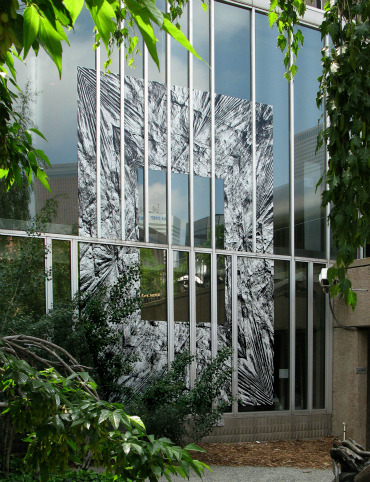 We somehow find your works complementing Ai Weiwei’s works. You are both searching for/ and trying to learn about the human’s conditions, but you are approaching this through our Earth’s history and through nature (unlike Ai Weiwei’s political themes). What do you think about the Ai Weiwei’s detention? (the recent crackdown on artists)

For me the situation of his detention in China is first unfortunate on many levels that one could easily imagine and be sympathetic with.  At, I think, a more important level, I am interested in his situation and the relationship of risk, artistic process and the formulation of questions of our time, whether political, ecological, perceptual and/or existential.  In a way it seems natural that Ai Weiwei would be challenged by his government as his work is challenging many ideas including political ones of theirs.  My thought is to see his situation is a very broad context critical to the asking, visualization and engagement with fundamental questions for our time as well as the role of the artist in society/nature.

John Roloff is a visual artist who works conceptually with site, process and natural systems. He is known primarily for his outdoor kiln/furnace projects done from the late 1970’s to the early 1990’s as well as other large-scale environmental and gallery installations investigating geologic and natural phenomena. He studied geology at UC Davis, Davis, CA with Professor Eldridge Moores and others during the formative days of plate tectonics in the mid-1960’s. Subsequently, he studied art with Bob Arneson and William T. Wiley also at UC Davis in the late 1960’s. In addition to numerous environmental, site-specific installations in the US, Canada and Europe, his work has been included in exhibitions at the Whitney Museum of American Art, UC Berkeley Museum, San Francisco Museum of Modern Art, Smithsonian Institution, Photoscene Cologne and the Venice Architectural and Art Biennales. He has received 3 artists visual arts fellowships from the NEA, a Guggenheim Foundation fellowship and a California Arts Council grant for visual artists. He is represented by the Lance Fung Gallery in NY and Gallery Paule Anglim in San Francisco. He is currently a Professor of Sculpture at the San Francisco Art Institute.

“My work is a examination of psychological and conceptual relationships between humanity and nature, materiality and process, often evoking a poetic interplay between primal and scientific conditions.  This exploration was inspired in the work of 1970’s through the early 1990’s by qualities of the sublime evoked by the geology and natural dynamics of the North American landscape.  Since the mid-1990’s other, related issues, particularly structural and systemic relationships between landscape, architecture and technology, have increasingly characterized the work.”