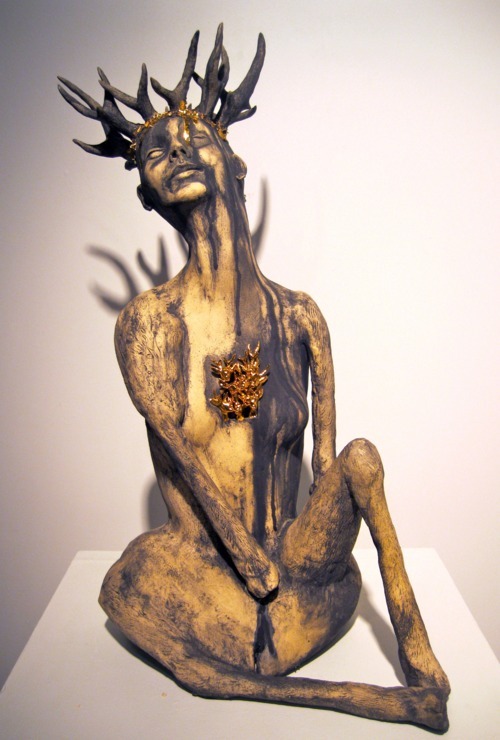 Do you remember your first encounter with ceramics? What made you choose this particular way of expressing yourself?

My first encounter with ceramics was when I was a child. During my family’s summer holiday, my parents would take my sister and I on a very long drive from Texas to Ohio, to visit my father’s family. I remember being so excited when we arrived in Ohio, because it meant that I was going to be able to visit my aunt Coby’s ceramic studio. She had an incredible ceramic studio set up in her basement, where she taught workshops. I remember loving the smell of the wet clay, being surrounded by an endless array of colorful glazes, china paints, gold, silver, and pearl lusters, and tools that enabled her students to create anything they wanted out of this wondrous natural material that was easy to form and smelled sweetly of the earth. I was enthralled with the medium, and wanted to learn the techniques of creating both my own sculptural and functional forms.

Another vivid childhood memory of being exposed to ceramics was seeing the traveling King Tut exhibit. I was drawn to the ceramic Bes deity pots and their use in the home as a protector of women and children. For the first time, even in my naiveté, I realized that there could exist a “conceptual” aspect to creating these forms. What also intrigued me were the marl ceramics of the second Naqada period, which were decorated with reddish-brown drawings that developed from the early geometric forms to less abstract images. Among some of my favorite are those that depicted oared boats transporting what has been interpreted as deities, and the decorations that included people and animals.

Working in clay has become a cathartic way of expressing myself, and because of this, I will never stop using it as my primary mode of self-expression. From these early childhood memories and tangible encounters, I found a palpable love of ceramic materials, which sustain me to this day.

Your works are figurative and often have a narrative quality. But trying to convey a certain message without using words can be difficult for an artist. Do you sometimes fear that people will fail to understand the meaning of your works? How outspoken should a work of art be?

I use to be concerned that viewers would fail to understand my work, but not anymore. After your work has been censored and removed from a gallery, you start to understand that that is actually a compliment. You have struck a nerve; a message got across to a viewer, understood or misunderstood, doesn’t matter. What created that shift in thought for me was the fact that I realized that everyone is going to have their own experience viewing my work, their own perception, and their own opinions. I am okay with that – to me that is what good art is about. If it moves someone, great; if it disturbs someone, great – I want my work to encourage people to go inside of themselves and ponder and reflect before reaching any hard and fast conclusions.

Looking at your works, words such as surreal, eerie and puzzling come to mind. Their appearance and the motifs used could remind one of Hieronymus Bosch paintings, or medieval iconography and bestiaries. Can you tell us more about your sources of inspiration?

You have hit the nail on the head. Hieronymus Bosch has been one of my biggest inspirations, he and Pieter Bruegel. Both artists had a “rebel” quality about them, which is something I feel akin to. Bosch’s work was inspired by heretical points of view as well as of obscure hermetic practices. Bruegel was similar in that his work depicted acute social protest, even though he faced political persecution as a possible outcome. I see my work and myself in a similar vein, similar in that I was raised Catholic, but have always questioned the whole idea of religion and social conformity. The idea of conforming to anything throws me into bouts of tantrum-like resistance. This aspect of my personality also affects the work I do in ceramics. I am not what the ceramic community refers to as a “purist”. I was rakuing porcelain, applying cold finishes, and adding textile work to my ceramic pieces as an undergraduate in the field.

One aspect of Catholicism that I took away was the attraction to the iconography. Being exposed to these depictions of suffering by both humans and animals both traumatized me and intrigued me as a child. Stories of a female saint having her eyes removed with a fork, or another that was stabbed in the throat with a sword (who by the way was transformed into an animal figure, the lamb) were not my favorite childhood bedtime stories. Being such a sensitive child surrounded by images of humans nailed to crosses and saints being martyred both traumatized me and intrigued me as a child. It was like being a sociopathic voyeur surrounded by ornate objects that depicted cruel imagery, but a voyeur who questioned, “do I reallywant to look at this?”, “will this saint who served as a martyr really protect me from psychosis?”

The surrealistic quality of these deities and saints sparked my interest not only in medieval iconography, but also in psychology. The psychological aspects of instilling guilt, shame, and fear via violent imagery are burned in my conscience, and unconscious for that matter. While I do not agree with this method of didacticism, I have realized that the images are unforgettable, which is an indisputable motivator in my creating realistic representations of dream-like states that incorporate facets of religious/medieval iconography. 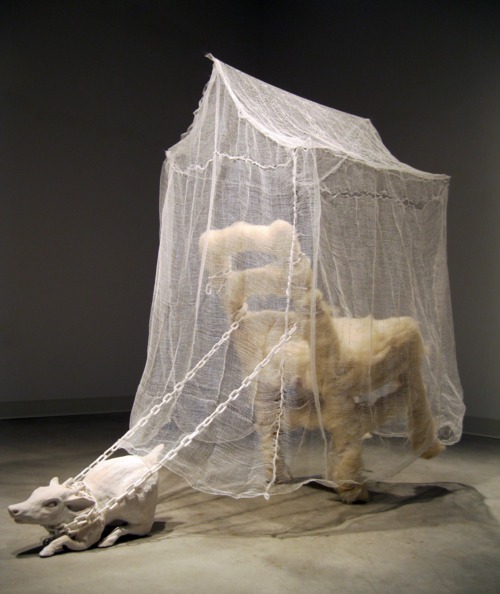 Tropophobia is a very interesting piece of art, static by definition, yet full of tension. While contemplating it, the viewer experiences mixed feelings such as anguish and tranquility, and it’s filled both with awe and uneasiness. Where did the idea for this installation come from?

So much of my work comes from a very personal, intuitive place. These mixed feelings that you have proposed to describe Tropophobia – “anguish/tranquility, awe/uneasiness”, are indicative of both human and animals’ personalities. We all have varying degrees of moodiness, some of us more mercurial than others. I am very in tune with my own neurosis, which inspires and propels my creative process. With a background that includes an undergraduate degree in Psychology, I have studied human behavior, and as a result I am sensitive to the diversity of individual personalities in various social environments. This increased sensitivity is beneficial in the creative process, but it can also be a hindrance in day-to-day situations.

At the time that I came up with the idea for the Tropohobia installation, I was going through many anxiety-producing transitions, including moving from California to Michigan for an artist/teaching residency. Relationships felt like they were dissipating, friends became insecure about my departure, I had a “fear of the unknown” – yet I proceeded, with what felt like all the weight of the world dragging behind me. Moving is not easy for everyone. Change is not easy for everyone, yet we are all faced with it at different times in our lives. It was also at this point that I came to the realization that I owned too much “stuff”. How was I supposed to move and bring all of the “things” that I “needed”? Hence Tropophobia, by definition the “fear of moving and change”, was created. 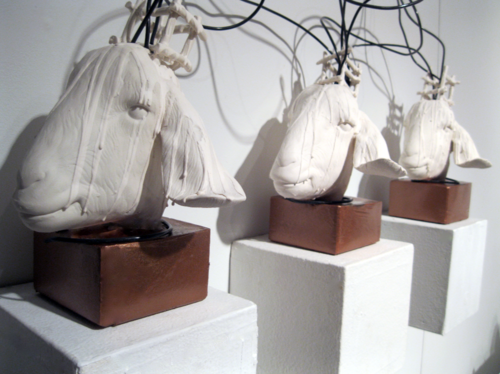 Some of your sculptures could be described as satirical, others relate to a darker side of the human psyche. Do you see them simply as results of an artistic exploration, or is creating controversy a purpose for you as an artist?

My intent is not to create controversy, although some of my work has. One of my pieces (not featured in this issue) was censored and removed from a show because a viewer was offended by the imagery. My work is extremely personal. The satire comes from mocking my own vulnerabilities, not in a way that is destructive, but cathartic. I am extremely self-aware in this sense. I have a dark sense of humor, one that is not easily disclosed in conversation, or in my interactions with others, but instead in that “quiet intensity”, via my work.