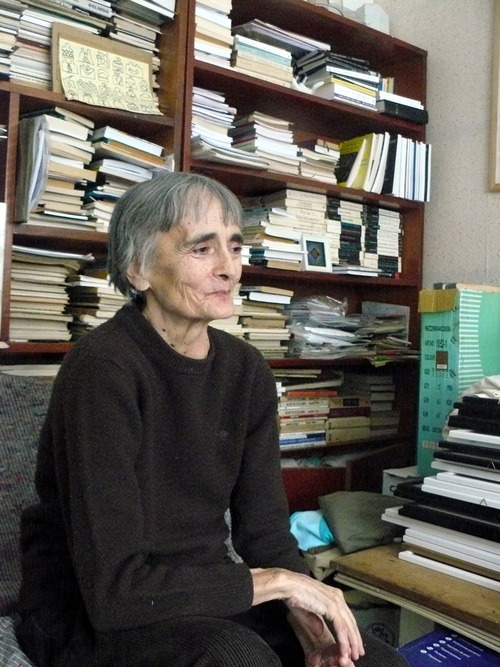 Eugenia Pop lived and worked in Cluj-Napoca, Romania, where she graduated from the Ceramics Department of “Ion Andreescu” Arts Institute in 1971. Over the course of 40 years, she had exhibited in many countries and has been awarded for her career by the Romanian Government (Order of Cultural Merit) and the Fine Arts Union.

Two days after our meeting in February, Eugenia Pop went to the Copăceni alms house, near Turda, to read in peace a book by Zhi Gang Sha. She wanted to learn how to communicate with her guardian angel. She told us that the spirit must be cleaned more frequently.

We thank Jeni Pop from our hearts and promise to carry her optimism out in the world.

How did the fascination for ceramics started?

I graduated Ceramics at the Fine Arts Highschool in Cluj. In the twelfth grade I had an excessive curiosity to do work as much as possible, that’s why I chose ceramics. I was a colleague with Arina Ailincăi for 6 years. We were also six in the department. Our personalities were very different, and they remained the same. A sculptor inoculated me the idea of versions. He gave me a theme, a ceramic piece in an architectural environment. After a few sketches, he told me to do more versions. I didn’t like the idea – why make more versions when the first one was good enough? But, if the master told me, I had to do it. I did lots of versions and sketches, from bad to worse. He chose from the first two, and I remained very sad because I worked so hard on so many. After a while, the seed sprouted in my mind. I was at a Communist party meeting, and I got very bored. I had my sketchbook at me and I was doing all sorts of sketches and drawings. The expression was changing with little diversity if terms of form. I showed the sketches to my professor. It remained my method over the years.

Now I stopped doing more versions on a theme. I read books, for example those written by Rudolf Steiner, and I make illustrations on the pages. When reading a book twice, the images speak to me a lot more and I feel the text very differently when it’s illustrated, just like a plastic commentary.

What are your main sources of inspiration?

I broke up with the illustrative image of the exterior form. I adhered to the archetypal forms, which are interior forms of the soul, forms that kids use when drawing, but also used in the antic culture.

Mihai Oroveanu said “Look how monumental your works are,” even if they were very small. Dan Hăliucă said the contrary: “That’s how it should be – plenty and small.” I used this thing with plenty and small a lot, because that’s how the image of the soul is. The soul is very capacious. From it’s ampleness you can make plenty and small.

A moment of crystallization appeared when I found my personality – when I said that this is how I want to express myself. It was the humanity theme, the man. The mother man, the old man, the child man. Mother Earth. These are themes that I feel I synthesized.

When I was young, my mother used to call me “little golden thorn” – she couldn’t tell me that I was not right, but I was also very determined. I was telling the truth. 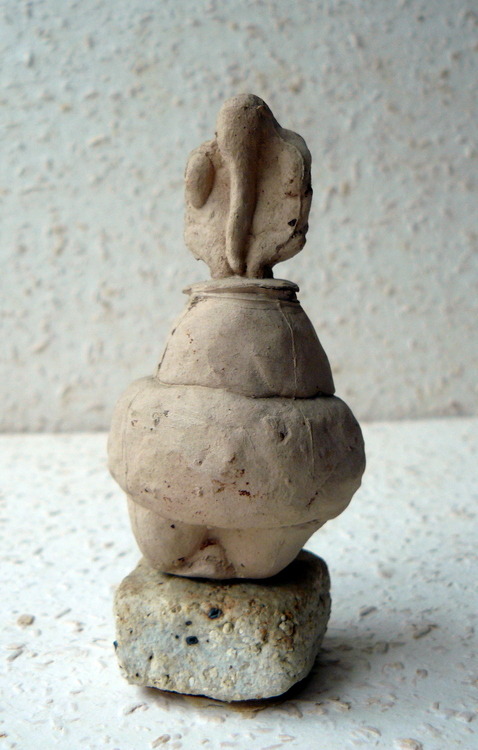 What is your dearest part in elaborating a new work?

Each part has its own magic. The first one is sketching the idea and choosing the right drawing, then follows the modeling and making the negative. After that, the fascination of the firing starts. It is like when a mother gives birth – she doesn’t know how the child will look like or what color his eyes will be. It is just like that after the firing, when you remain charmed by an object, and you say to yourself that this is mine! – its color has changed and it shrank. After you inspect it for a while, you adopt it or not. Sometimes you have to say I’m sorry – this is not mine.

I dream of the moment when someone will give me a studio and tell me to just work and forget about anything else. I had chances like this when I had good working conditions. At Faimar, in Baia Mare, I had a ceramics laboratory where I worked with some amazing chemists. It was filled with glazes and kilns. I was working all day long.

In the summers I was making a lot of negatives at Iris, a ceramics factory in Cluj. After the school started I worked there with students from the Fine Arts Highschool.

Can you tell us more about “The Culture and Agriculture” and “The Apple – The Food” performances?

Actionism was a family game. My grandmother loved to take care of the neighbors children; she formed a choir and they did gymnastics and little shows for the neighbors. My mother was part of my grandmother’s team. When I grew up we were three, so my mother did the same thing as my grandmother. We learned to play the harmonica. Two of the kids owe my mother their artistic career. She used to photograph flowers with a zoom device, for the eye. I later met those two, Karcsi and Istvan Felechi.

The passion for cultural activism and artistic manifestation is of old. I think it came from the German part of the family, from my grand-grandmother. She only spoke German. In German families (Transylvanian Saxons) there was the tradition of studying music, poetry, drama and masquerade – to have an artistic activity, the need for culture.

The Culture and Agriculture photography project: I have just moved on this hill (in Zorilor neighborhood, Cluj), and there were no houses by then. I did a film. Ion Grigorescu proposed me to build a house from clay. I made myself a white cloth costume. There was a clay pit not far from here, where I found a fen filled with water. I started battering the clay, I built a citadel, and he was filming quietly everything that looked interesting.

Olga Buşneag saw the movie and said it looked like Ion filmed the labors of birth. He captured only my legs and the white curtain. It was really dramatic, it had weight; abnormal fragments of the body were depicted. I still have that costume which looks like a mélange between a judo and a folklore singer’s costume.

Ionică (Ion Grigorescu) told me there will be a photography exhibition at the Schiller House. I did a composition because I wanted to redeem the nature its ideas. Art is a divine composition. 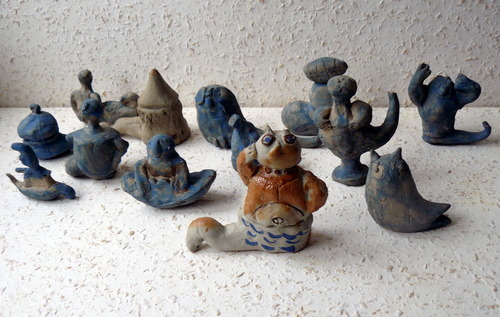 How the contact with the young generation influenced you? You actively participated in the evolution of many ceramic artists.

Right after I started teaching I discovered that I was very angry, the students managed to give me unpleasant feelings. I had to control myself. In Toca’s class, who was older than me, I found a calm, intelligent boy. I was telling him to tell me if I’m raising the voice, but he kept on laughing. I first professed in 1972. It was a very hard experience because I had the ideal to teach the students a lot of things. Those who supported my exigency were the happy ones, but the others suffered. The ones who suffered never wanted to do ceramics. Zmic for example (Gavril Zmicală), with Maramureş origins, learned to work since he was a child, he had no caprices. For him it was important what I said, how I said and how I opened his horizons. I visited him after he graduated the Art Institute in Cluj. The people from Maramureş are very hospitable. He showed me the loft of his house where he kept a mountain of croquis drawings. I saw his native talent in a portrait sculpture depicting his brother and made our of nut wood. It resembled with Brâncuşi. The portrait had a fantastic anatomy, an excessive detail and accuracy. I had the sentiment that the student has surpassed his master. At his diploma in the twelfth grade he did a series of work depicting frogs, which were very expressive, each with unique details. I was very happy by the outcome, but he said it’s not a big deal. It was a good year.

I learned that school is like an orchard. In one year it has good fruitage, but in the next year there is nothing to press out.

What advice would you give to a young ceramic artist?

My only Christian advice for them is to love ceramics. With love you can do anything. If you don’t love, it disarms you of many things.

Life always offers you projects. Impulsions come on very strange ways, but there is always a kind of deep will. 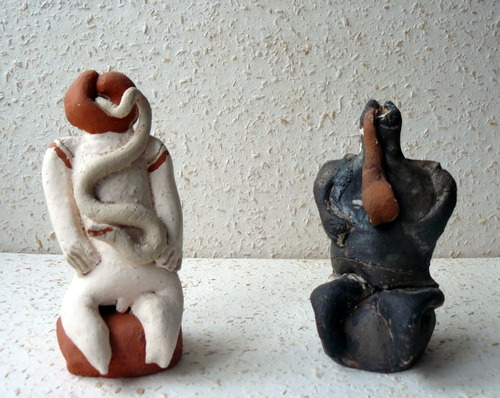 By Alexandra Muresan and Vasi Hirdo, February 2012. The interview was published in Ceramics Now Magazine, Issue 2.